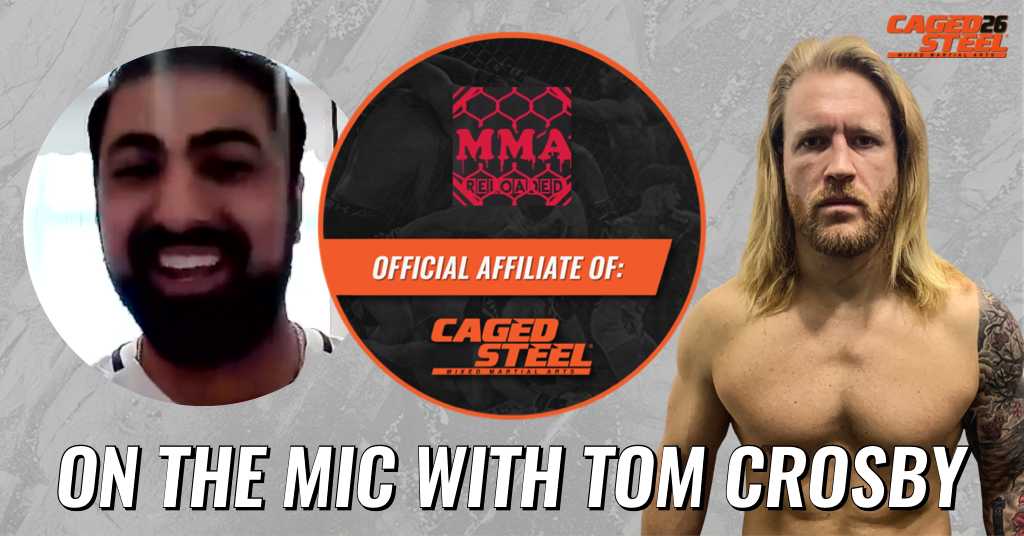 MMA Reloaded on the mic again! This time with a highly anticipated athlete who is returning to settle the score which last time ended in a majority draw. Tom ‘The Viking’ Crosby straight away accepted the rematch against Shaun ‘The Legend’ Lomas. The fight surprised many, resulting in a draw on Caged Steel 25. All social media polls pointed toward Tom being the sure winner of the bout, but this is what we love about MMA. Anything can happen! Both athletes were relentless, constantly moving forward, applying pressure, but neither of them broke.

Tom was shocked by the result, it was clear when the decision was called. He felt the fight went his way winning the first and final round.

MMA Reloaded dug deep to find out how Tom feels now, how training is going and to find out any predictions for fight night. Enjoy!

Support MMA Reloaded and buy your tickets from him here:

Commission will go directly to him to support what he’s doing for the UK MMA scene.

Here’s a bit about Arjun and MMA Reloaded…

What made you to start MMA Reloaded?
– MMA Reloaded came from my Passion and love of the sport. Instead of leaving all these comments on all these different Facebook groups I felt I could change their perception of the sport on a bigger scale.

What’s most loved about MMA Reloaded?
– There isn’t one specific thing. I love doing videos. I love analysing fights to put appreciation on the fighters and innovating new ideas and segments to put out there.

Who’s the most exciting Caged Steel athlete to watch?
– That’s a tough one, I would say it’s a toss up between: Adam Bramhald, Jack Holt, Stafford Swainston, Ibragim, Robbie Kennedy, Robbie Brown and Warren “The Tank “ Mason. There’s so many!

If you missed it, check out MMA Reloaded interview with the Caged Steel Boss here.

MMA Reloaded is going to be there on fight night, make sure you are too!