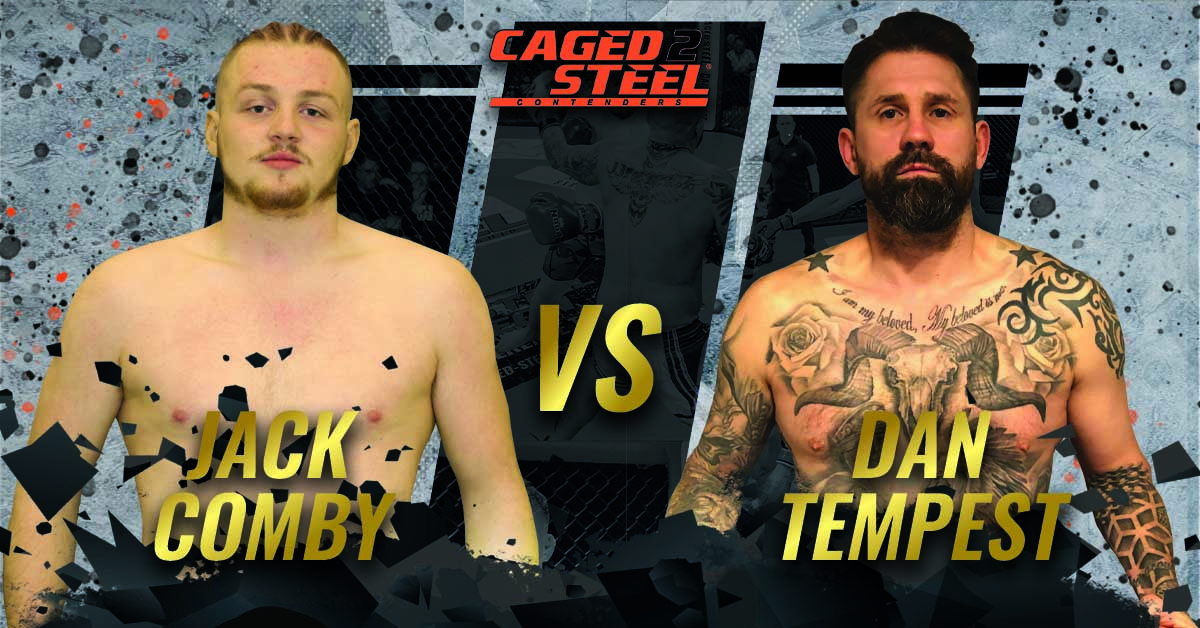 Blog, Contenders 2, MMA, News
“I am determined to be the best.”
Sponsored by Marquess Private Executive Hire, we have an explosive fight card lined up for Caged Steel Contenders 2! Fighting for the Amateur Super Middleweight title at 88.5kg, Jack Comby from Lodge Fight Club in Spennymoor will be going to war with Dan Tempest of AVT!
Currently the British Amateur Light Heavyweight title holder at 93.0kg, Jack Comby will be stepping down a weight class to dominate the Super Middleweight division too. We asked Jack what it’s been like cutting weight for the fight and if he feels confident that he’ll make weight at the weigh ins. “I have the best people helping me in my fighting career. I’ve got amazing coaches and team mates that push me – that always helps to keep the weight down. I will definitely be on weight!” Predominantly a Middleweight fighter at 83.9kg, Dan will technically be going up a weight class – although Dan will only have to make some slight adjustments to reach weight for the upcoming fight. “I normally diet to 88kg and cut 4kg in water for a Middleweight fight, so nothing will really change apart from I get to avoid the dreaded salt bath!”

Dan Tempest is an abundantly experienced athlete, having fought 17 amateur fights in total. We asked Jack what he’s hoping to bring to the fight that could out do Dan’s formidable experience. “I am determined to be the best. I have the heart to face anyone in the cage. Anyone that’s in my way to becoming the top fighter, I am going to try my best to put them away.” If Jack takes the win from this fight, he will be reigned the double champion! Jack’s known for being an extremely tough and durable fighter. We asked Dan how he was going to combat against Jack’s durability. “I feel we are very similar fighters. We both like a good tear up. Let’s just say, I don’t think we will need a big cage!”
This will be Dans sixth appearance on Caged Steel. We asked Dan how he felt about being back on the show, and why he continues to fight on Caged Steel. “After the disappointment of what happened on the last show, I seriously considered calling it a day – but after a few months of moping about, I’ve finally got that hunger back and I’m excited for the opportunity to fight another high level opponent. Caged Steel is by far the best show in the area, and a fantastic venue. It never fails to bring in big crowds. Shows like Caged Steel help to raise your profile as a fighter due to the massive coverage it receives.”
This will also be Jacks sixth appearance on Caged Steel. We asked Jack if he was glad to be back – and being from Spennymoor, why he has chosen to fight on Caged Steel multiple times. “It’s great to be back! It’s always good, especially on the night of the fights though – as I get to watch some amazing fights and be back doing what I love best. Caged Steel is just a great show in general. We all get looked after by the Caged Steel crew and it’s the best amateur show in the country. It’s run professionally and there really are some great fights on the shows!”

Dan fights out of AVT – as many of our Caged Steel fighters fight out of this gym, we wanted to know what was the best thing about training at AVT. “There’s no egos – from the seasoned veterans, to the debut fighters. We all work for a common goal, pushing to become the best versions of ourselves. As a coach, there’s no one better than Danny Mitchell. He has his own unique way of getting the best out of fighters, that’s what makes him a cut above the rest.” Dan went on to tell us about one of the highlights in his relationship with coach, Danny Mitchell. “I was two rounds down, my nose had been pushed through my cheekbone and I was drinking down my own blood so the fight didn’t get stopped. Danny said to me, ‘Stop messing about now, single leg him, take his back, and finish him!’ I walked out into the fourth round, battered to hell, laughing because he made it sound so easy. The bell rung and that’s exactly how it happened. Perfect finish.” 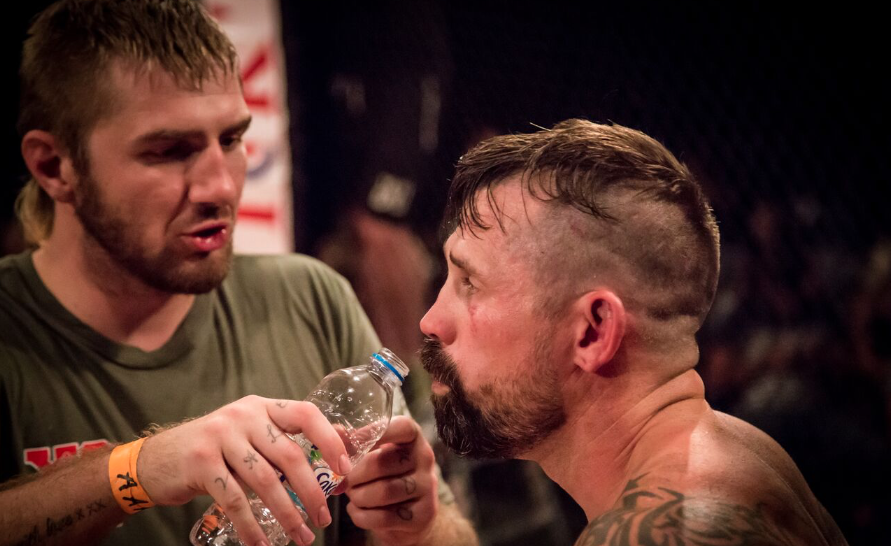 “At nearly 40 years old, having a family and running a business, a fight camp is a major commitment! I only want to fight the best fighters or there’s no point in giving up valuable time with my wife and kids. Training at 5am in the morning is just not worth it to fight someone I could beat in the first round.” Dan told us that every fight camp could potentially be his last – so his goal is simple, to fight for as long as his body will allow and as long as he enjoys it.
Being the younger of the two opponents, Jack has some very different ideas and goals. “I would love fighting to be a full time job for me. It’s all I’ve ever wanted since I was a little kid – to be a professional fighter, to be successful in life, and just be happy doing what I love.” We asked Jack what he thought this fight would do for his fighting career. “It will boost my name in the community of MMA. Dan is a very respected opponent in MMA. He’s been around for a while, had some great fights, and I believe I have the ability to win the fight – which is just going to get my name out there quicker!”
With MMA becoming the fastest growing sport to date popularity wise, we wanted to know why Jack is pursuing a career in MMA over other sports. “I just love combat sport. I’ve tried a lot of different sports and I just feel that I connect with MMA. I enjoy it a lot more than any other sport.” We asked Jack if there was anyone he looked up to in the MMA scene. “There’s a lot of fighters I look up to. My favourite right now is probably Israel Adesanya. Just going off of the pure fact that he is entertaining to watch, in and out of the cage.”

We wanted to know why Dan had gotten into this remarkable sport too. “It’s simple for me. I can’t sing, I’ll never be a model, and I’m rubbish at football – but I love a good scrap!” That’s a good enough reason for us. We asked Dan if he had a favourite MMA fighter that may have inspired him. “The two fighters I enjoy watching the most are Louis Lee Scott and Adam Bramhald. They never fail to put on a fantastic show. My favourite fighter of all time will always be Chuck Liddell though. The original, and still the best!”
Finally, we wanted to know if the fighters had any predictions for their fight and if they had anything they wanted to say to their opponent. Here’s what Jack Comby had to say, “All I know is that I am going to be wearing two belts that night. I don’t have any words for Dan, just let’s have a great fight and give the crowd something to watch!” Dan commented, “It’s going to be the fight of the night. I’ll do my talking in the cage!”
So who will come out on top? What will win in the end, experience or durability? Find out on Saturday the 14th of March at Doncaster Dome! Buy tickets now! 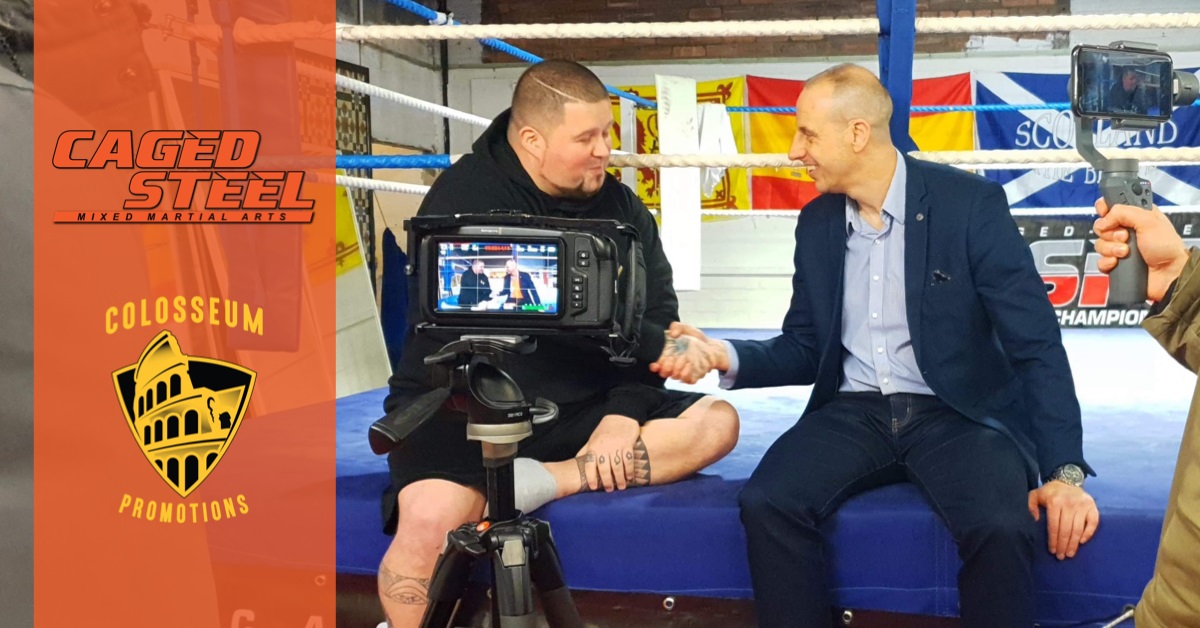 Blog, MMA, News, Sport
Colosseum Promotions in Association with Caged Steel
We have recently become associates with Scotlands Colosseum Promotions – an up and coming Scottish promotion. Part of the Colosseum Martial Arts and Fitness Gym located in Greenock, Inverclyde – run by Mark Waddell, a fighter at one of our previous shows. Having significantly developed as a company and grown in epic proportions in terms of popularity, we feel 2020 is definitely our year!

END_OF_DOCUMENT_TOKEN_TO_BE_REPLACED 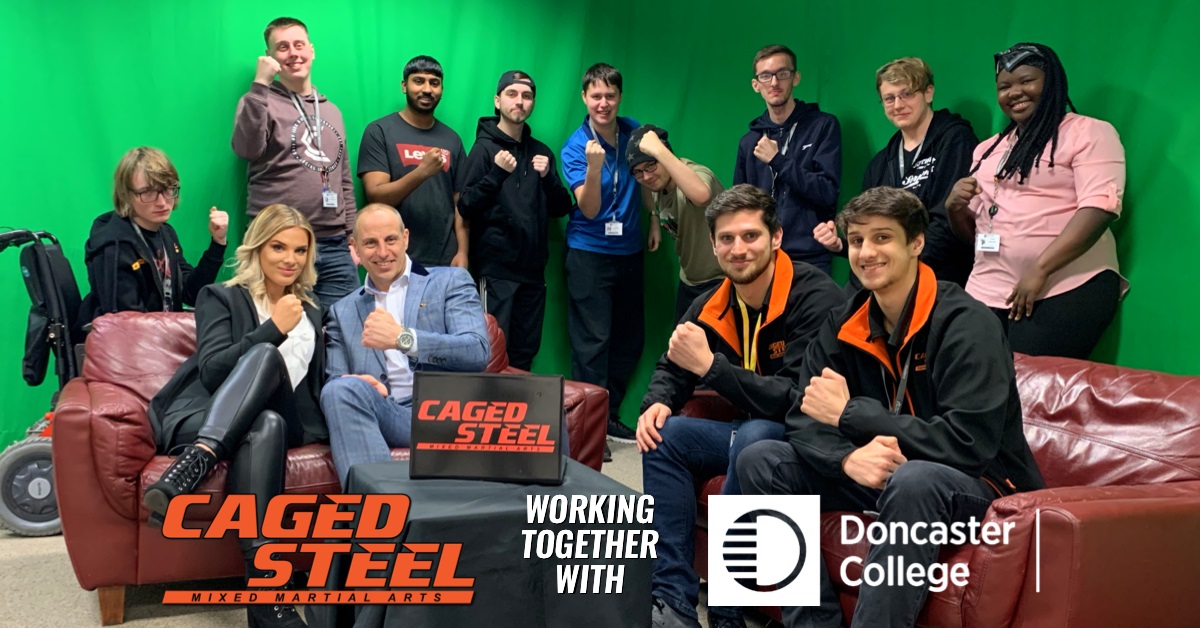 Blog, Caged Steel TV, MMA, News
Collaboration with Doncaster College Students
We’re proud to announce that we have invited students from the Doncaster College and University to work together with our existing team on the highly anticipated comeback of Caged Steel T.V. We have decided to give the students studying Film and Animation at the College the chance to gain essential work experience working on an exciting project.

END_OF_DOCUMENT_TOKEN_TO_BE_REPLACED 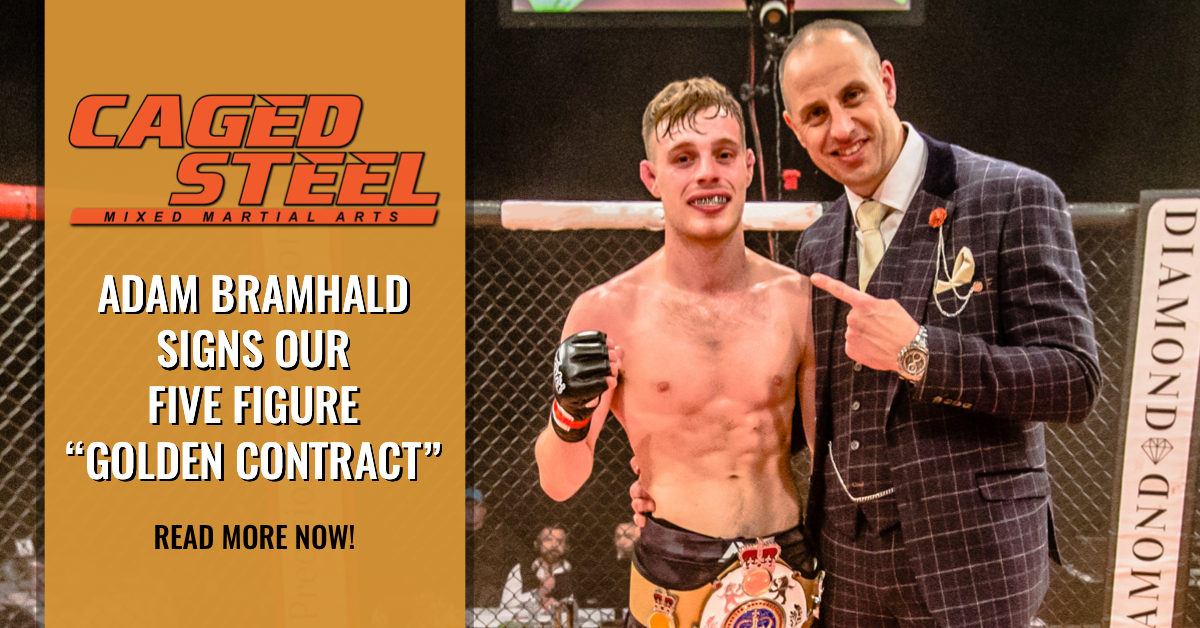 Blog, Contenders 2, MMA, News, Sport
Adam Bramhald signs our five figure “Golden Contract”
2020 is set to be a lively year for us, and pretty major development wise. Not only for our devoted fan base, but for our spirited fighters too! 2020 sees the arrival of our ‘Golden Contract’ – an essential incentive for our highly acclaimed athletes. We are seeking out prospects within the Pro MMA ranks that want to collaborate with our promotion through marketing and ticket sales.

END_OF_DOCUMENT_TOKEN_TO_BE_REPLACED

Blog, Contenders 2, MMA, Sport
Caged Steel Contenders Is Back
Caged Steel Contenders is back, and it’s going to be just as electrifying as our last Contenders show in March 2019. Taking place on the 14th of March 2020 at the Doncaster Dome, doors open at 5:45pm ready for the show to begin at 6:15pm. Standard tickets are just £35, or get the V.I.P treatment for £55. You will not want to miss this, it’s definitely one to watch!

END_OF_DOCUMENT_TOKEN_TO_BE_REPLACED

We are proud to have latest sponsors, Marquess Private Executive Hire, part of Caged Steel! Having just celebrated their first birthday, we think Marquess are a brilliant addition to our sponsors. Offering a first class executive travel service – why not use Marquess on the way to the show and arrive in style to Caged Steel? END_OF_DOCUMENT_TOKEN_TO_BE_REPLACED

We are proud to announce that we have an exciting new sponsor on board – Nando’s! Due to this explosive partnership, Nando’s have offered to give a generous discount to the Caged Steel fans on fight night! So if you fancy a “cheeky Nando’s” END_OF_DOCUMENT_TOKEN_TO_BE_REPLACED

CS24, MMA
“I used to play football and rugby, but I was better at punching people in the face.”

Sponsored by Marquess Private Executive Hire, we have another dynamite fight in store for Caged Steel 24 – Night of Champions! Fighting for the Caged Steel Welterweight Title, Oliver Harriott (3-0-0) from Sheffield Shoot Fighters will be going to war with END_OF_DOCUMENT_TOKEN_TO_BE_REPLACED

CS24, MMA
“I’ve always got tricks up my sleeve, just make sure you’re ringside to see them.”