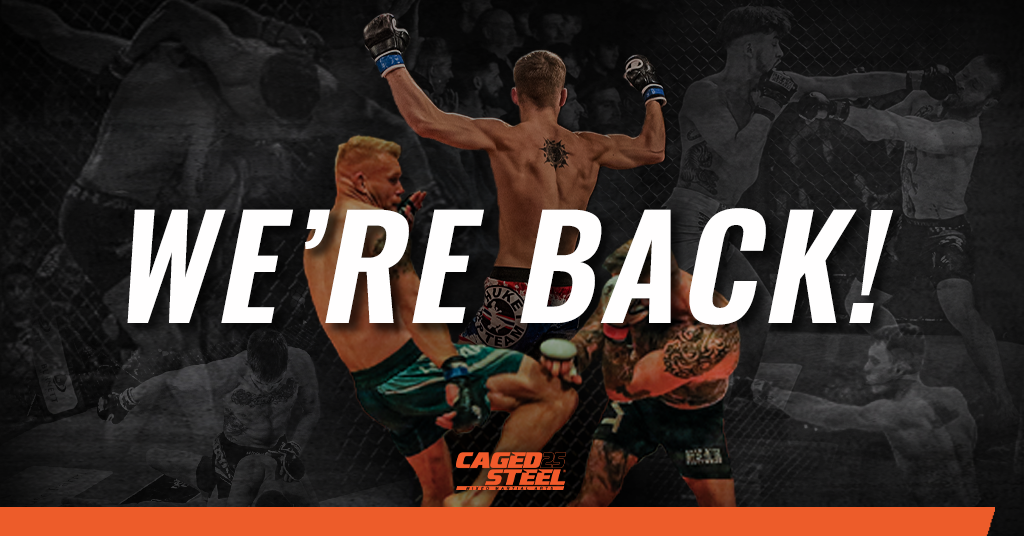 It’s been almost a year since our last show, and although Caged Steel 25 will take place behind closed doors, we promise to bring you the show you’ve all been waiting for! How does a night in with 20 live fights sound? We’re giving you all of the explosive and fully loaded action we usually bring, but for the first time ever… attire is optional. Predominantly a professional show with professional prelims and an exciting professional main card, you’re not going to want to miss this! Watch all of the excitement unfold from the comfort of your own home on Pay Per View – for just £10!

“We’re back – April 10th! I can’t wait! It’s been so long, it feels like forever since we’ve been able to have a show. It’s been very difficult, and it’s a very difficult time. I’ve had to make some tough decisions but I believe this is definitely the right decision. The team and myself are ready to go!” — Dominic Gibbs, CEO at Caged Steel.

Coronavirus seems to have put the whole world on hold this past year – we know it’s been challenging for everyone and we’ve definitely been hit, hard. But we’ve kept ourselves afloat throughout the pandemic because we love our shows, and we know you do too. We didn’t give in to the fight, as we wanted to continue to support our athletes who are desperate to get back out there and give you a show!

Our fighters careers have been none existent for too long now and we want to get them back doing what they love as soon as we can – all whilst staying within the Government’s Guidelines, which is why we’ve decided to go ahead and take the show behind closed doors. We will be abiding by all of the Government’s Guidelines to ensure your safety and the safety of our fighters. We can confirm that we have had approval to go ahead with Caged Steel 25, so we’re all set to give you a night IN to remember!

And what a night it will be! We’ve got some really exciting fights in store for Caged Steel 25, which we can guarantee you will not be disappointed with. We’ve got an explosive catchweight Main Event lined up between Scott Malone and Kiru Singh-Sahota. Scott is a well-known and respected athlete within the UK MMA scene, achieving many accolades throughout his MMA career, leading to his current 7-4 fight record and being ranked 19th out of 130 professional athletes in the UK and Ireland. Kiru, fighting out of AVT in Leeds, is already an established professional Flyweight athlete with an undefeated 5-0 record and ranked 21st. Even though Scott is a far more experience athlete, Kiru has adopted the true AVT spirit and accepted the fight, knowing if he is victorious this would immensely boost his name within UK MMA.

We’re excited to welcome professional athletes from around the UK to our orange canvas this April 10th, including, Muhidin Abubakar, Dakota Ditcheva, Alan Brykalski and Carl Jones Jnr. There’s a great range of fights taking place in different divisions and so many 50/50 matchups. It will be an interesting fight card to predict.

In our preliminary card, you can also expect – fighting out of SBG Bishop Auckland (run by UFC fighter Davey Grant), Richie Bonallie has been matched with Steel Evolution’s Oscar Ownsworth, who also trains at The Unit and occasionally works with Danny Mitchell (UFC Veteran). This fight is highly anticipated as it’s been in the making for a while now. We’ve heard that they’ve been speaking over private messages about wanting to fight each other – and they’re both wanting to get that next win! But who will take it? Definitely one to watch!

Finally, you can look forward to watching up and coming amateur talent featuring within the nights action, all Championship title fights. One standout bout is for the Caged Steel European Amateur Featherweight title. Stafford Swainston (5-1) is the current title holder, he will be defending the belt against Dagestan athlete Ibragim Ibragimov, who holds an undefeated 6-0 fight record. There’s high anticipation for this fight. Both athletes have contrasting fight styles and both have an equal chance of winning in the publics eyes. Anything could happen, this is going to be very interesting to watch.

Fear not, your old favourites will also be making an appearance in the cage – Louis Lee Scott, Musa Christian, Warren Mason and Adam Bramhald are set to be fighting on Caged Steel 25 too!

We’re lucky enough to be one of the very few MMA promotions to be able to host an event in the current circumstances, so this is a fantastic opportunity for UK MMA athletes – please, show your support. It’s just £10 to kick start live MMA events again!

Get your stream in advance before the price increases, below! 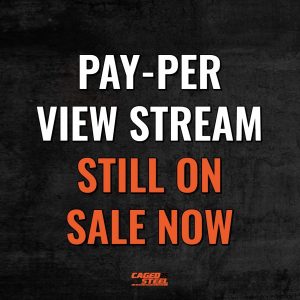