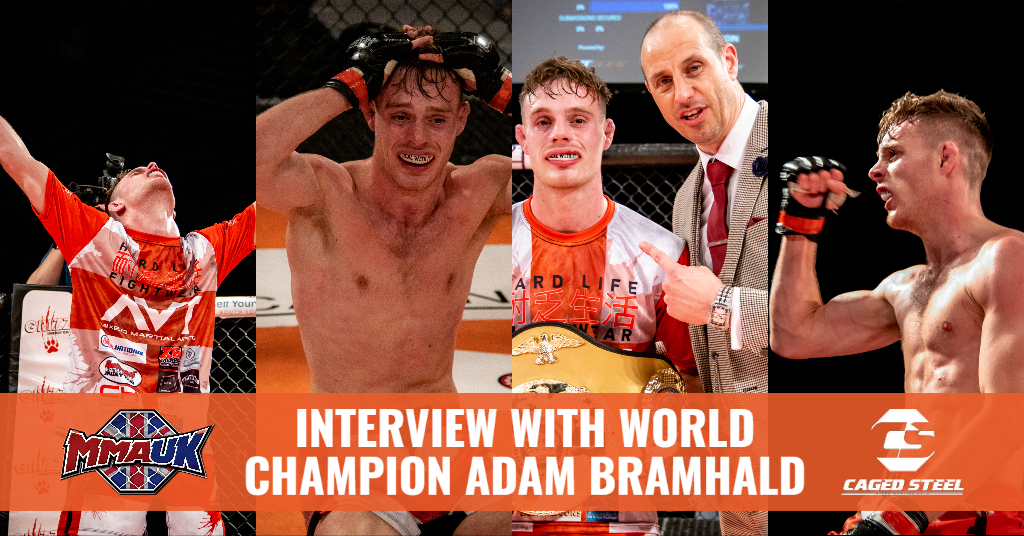 MMA UK are known for their expert reporting and support within the UK MMA scene. Their journalists have interview some of the world best and help provide a platform for up and coming athletes too. We’d like to first of all, thank their own Aaron East for interviewing our new Bantamweight World Champion. Adam “Samurai” Bramhald 12-2-0 is an English professional Mixed Martial Artist currently competing in the Bantamweight Division, Representing AVT MMA Leeds. A professional competitor since 2014. He has competed for promotions around the UK and Europe.

(MMA UK) I’d like to start this off by thanking you for taking the time to speak to me today Adam. And also like to congratulate you on your phenomenal win at Caged Steel 27. December 4th, I bet shall forever be remembered as one of the highlights of your career thus far. Taking on a very experienced Kostadin Enev and capturing the CS Bantamweight strap. What was going through your mind throughout that explosive performance?

(Adam Bramhald) “My thoughts during the fight were very mixed given I thought my ankle broke during the very first exchange. I had no control of my foot, thinking it was completely out of action so at this point I had to consider the fact that I’d not be able to continue. I was happy to concede the takedown to assess it; knowing I could get back to my feet if all was still where it should’ve been. I saw that it wasn’t broken and then got to my feet and although it still took a further 30 seconds to regain feeling, I knew I’d be able to regain myself and go on to win. I knew even before the fight that after the first 3 minutes was done I’d win the fight. I just didn’t expect to have no movement or kicks for it.”

Your deconstruction of Kostadin puts you on a 10 fight win streak, 8 of these astonishing performances being with Caged Steel, where you now sit upon the Bantamweight throne. These numbers speak volumes in regards to your sheer determination to succeed in the cage. What inspires you to succeed in the world of Mixed Martial Arts?

“Success in the sport inspires me to succeed. I want to earn a good future for myself and my future family. I’m inspired by many people, my dad, my grandad, Danny. As well as belief in my ability to gain these things. When the day comes when I no longer believe I have a shot at fighting on the big stages I’ll hang up my gloves.”

Behind every great fighter, there’s a great team. It has been an explosive week for AVT Leeds, with four professionals including yourself taking the W. What’s it like being part of the well-oiled machine that is AVT?

“You’re right and although this sport is individual in competition it’s a massive team effort and as a collective, we motivate each other as well as push each other to get the performances we need. It’s been especially difficult for me the last 2 fights as my team have had to work around me as I’ve been suffering from back to back injuries through each camp. Danny and Jay are great coaches and I look up to them not only as martial artists but as people.”

Exceptional performances in the cage always turn some heads. And with the UFC coming to London on March 19 in 2022, this performance as well as the outstanding record you hold could just turn Dana whites gaze your way when choosing some local talent for the upcoming event. What would it mean to you to be a part of the biggest stage of them all?

“It’s been my dream to fight for the UFC in London since I watched Danny fight their years back. I set myself small, realistic goals and I’ve slowly been ticking them off. My ultimate goal is to fight for the UFC and win a fight there. Getting the call up is my absolute dream and I’d be happy with my career to get there. I believe I’m the right fighter to be signed to the UFC especially on the UK and European cards. I always go in there to make the crowd roar and entertain. I do not care about boring wins. I’m there to turn heads and be remembered for the entertainment I bring.”

Last but not least do you have a message for your ever-growing fan base and anybody you’d like to shout out to?

“There’s not much more I can say to my fans other than express my absolute eternal gratitude for being there for me from my amateur career to now. I’ve been overwhelmed by this fight just how much everybody has come together to help get me noticed by those at the UFC and I feel very lucky to have people like that on my social media.”